“Great danger is always associated with great power. The difference between the great and the mediocre is that the great are willing to take the risk.”

I really don’t know why, but i kept putting off reading this one for sometime. I saw the gushing reviews and recommendations, but i just didn’t pick this one up. Then finally, i decided: why not? I am so glad that i did that, because i needed this book in my life. Everyone does. i cannot elaborate on how much i loved it. I felt like i had finished a workout after reading this, the adrenaline rush was real. I loved all the characters and was so emotionally involved in this, that if they died(spoiler alert!), i died.

A powerful epic fantasy novel with roots in the 20th-century history of China.

Opium runs through the heart of the Nikara Empire, a constant reminder of the war with the Federation of Mugen that brought it to the empire’s shores. A war that only ended thanks to three heroes – the Vipress, the Dragon Emperor and the Gatekeeper – known as the Trifecta. They were legendary figures, each bestowed with god-like powers, who united the warlords of the Empire against the Federation.

Decades have passed. The Trifecta is shattered; the Dragon Emperor is dead, the Gatekeeper is missing, and the Vipress alone sits on the throne at Sinegard. Peace reigns, yet the poppy remains.

War orphan Fang Runin grew up with it. Her adopted family smuggles it throughout the Rooster province, making a living on the misfortune of those addicted to its smoke. But when Rin’s parents force her into an arranged marriage, Rin refuses to accept her fate and fights her way to the prestigious military academy at Sinegard.

There she will learn of drug-fuelled shamanic powers thought to be myth, powers which might defeat the Federation during its third invasion. But the cost of some power is too great to pay, even if it means winning a war that threatens to destroy an entire nation.

This book is about war. The horrors of it , the effect it can have on people decades later, centuries even. It is a book about how people are used and treated like animals when they cannot be understood. When we cross the boundaries of humanity, into a place where man has disregard for the life of another, for the lives of thousands.

The book starts off light, with Rin determined to get into Sinegard and away from her foster family who are trying to marry her off. She works hard for it and that is something i respect about this book. There is actual struggle to study and earn her place.  However, being a dark skinned, poor girl at Sinegard is not easy. She has to constantly prove herself and make sure that she doesn’t lose her place. She is bullied and treated unjustly, but that doesn’t make her back down. She earned her place here and she wasn’t going to lose it.

“Children ceased to be children when you put a sword in their hands. When you taught them to fight a war, then you armed them and put them on the front lines, they were not children anymore. They were soldiers.”

The book depicts the actual war that took place in China in the 1930 and the author does not skip the details. The pain suffered, physically and emotionally. The anger, the hate and the loss of hope. This book is not an easy read.

I loved Rin, her bravery, her determination and also her vulnerability-which she turned to strength. She was such a strong character and she did not let other people define her or put her down. She did not let the prospect of having to work hard stop her. She grew, she learned and her character development was amazing throughout the book.

i felt so many things while reading this: anger, pain, sorrow, happiness. This book makes you feel things. It makes you go through the pain as well as the happiness. It should be read.

If you didn’t already get this from the review- i loved it. I couldn’t stop until i was done. It is definitely a one of my favorite books of all time and i can’t wait for the sequel.

So, 2018 is nearly coming to an end and we have had some pretty good YA books. Lots of diversity and important themes that have been explored. So here’s some of my favorite book releases of the year in no particular order:

THE CRUEL PRINCE by Holly Black

What a ride this book was! So many different plot twists, betrayals and secrets. Definitely one of my favorite books to date. The sequel, The Wicked King, set to come out in January is one of my most anticipated reads of 2019. Check out the sneak peak here

Recommended for fans of: Six of Crows series by Leigh Bardugo

THE POPPY WAR by R.F. Kaung

This was so good! i mean, i was in a slump and this totally got me through it. There was action, magic and anything you could ever want for a good fantasy book.

Recommended for fans of: The Young Elites series by Marie Lu

THE REAPER AT THE GATES by Sabaa Tahir

After reading the first two books in the series, this was one of my most anticipated releases of the year..and boy, did it deliver! It was such a perfect addition to the series and just has me dying to know what is going to happen in the next book.

Recommended for fans of: Anyone who loves a good fantasy will love this

BRIGHT WE BURN by Kiersten White 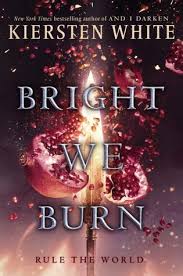 What an ending to one of my favorite series ever! Kiersten White truly did the series justice and gave us the perfect ending. If you haven’t read this series already, please start now.

Recommended for fans of: The Cruel Prince by Holly Black

THE ASTONISHING COLOR OF AFTER by Emily X.R.Pan

A beautiful book about dealing with loss of a loved one lost through suicide. This book really makes you feel the grief of the protagonist who was trying to understand why her mother killed herself. It makes you understand that some answers can’t really be found and that you aren’t responsible for someone choosing to take their own life. That was their decision.

Recommended for fans of: Contemporary books that make you feel something such as  Please Ignore Vera Dietz by A.S King

SMOKE IN THE SUN by Renee Ahdieh

This was a good end to the Flame in the Mist duology. Though i preferred the first one, i enjoyed this one as well.

Recommended for fans of: Fantasy with romance and a kick-ass heroine as well.

“Never show, Never tell.”
Okay, before i start the official review, i wanted to know: didn’t that line remind you of Frozen? Just me? That’s fine.

I have a feeling a lot of you are going to like this book, and that’s good. Personally I am really not sure about my feelings regarding this book. I liked it, but I didn’t love it. I read every page, i wanted to. But I didn’t devour it. There were some things that I didn’t predict, but unfortunately I predicted most of them. Also if you want to know, it isn’t like Frozen.

The story takes place in Chakra which has been conquered by the Aquitans’, and all magic has been banned.

Jetta, is a shadow player, one of the best. She uses her ability of being able to capture dead souls to control her puppets. How? She traps the souls in her puppets and commands them. The problem lies in the fact that the use of , or having such a power could get her killed.
However Jetta has another problem, one that is just inside her: she is mentally ill. The only cure that she knows of is the water of a magical fountain and to get there would mean that she would have to secure a place on the king’s ship that would take her to Aquitan.

However Jetta and her family are soon in danger when she nearly gives them away. With the help of Leo, a gun smuggler for the rebels, she tries to make her way to Aquitan without being found out.

THE CHARACTERS:
Jetta- she is brave and willing to do anything for her family. She is also scared of herself, the power she years and what she really is.

Leo- the owner of La Perl, a bar and a stripper club and also the smuggler for the rebels,though he is not directly in league with them. Even though he was present during most of the book, I would have liked to get to know him better.

Captain Le Garde- the army general and an all round asshole.

I wish we could have had characters such as the Boy King, Theodora and Cheeky’s explored a bit more. They were important but weren’t really given the necessary attention.
The writing was engaging and kept you interested but wasn’t unique. The author uses a few french words in the beginning that may confuse you and like me you may find yourself googling “What is a fantoche?”

Themes such as mental illness, colonialism and feminism explored quite well.

All in all, the book was an engaging read that most readers will enjoy. I definitely will read the sequel.