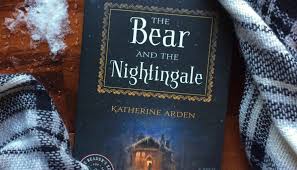 What a beautiful book! After I was finished, i felt so… dreamy. I want to live in a world where I can live with a frost demon and ride a stallion. Also this book just increased my obsession with horses and my undying love for them . It was so atmospheric and honestly like reading one of those fairy tales.
THE PLOT:
Vasilisa is a young girl, the last child of her dead mother, who also happened to inherit a gift for being able to see creatures not otherwise visible to man. This sets her apart from a young age and she is labeled a witch for being different from other girls. She refuses to be treated like an object or as though she had no worth beyond being a wife and a mother. She is wild, independent and brave. She is an outcast. However, after a new priest begins to cause fear among the people, dangerous creatures begin to awaken that cause death and wreak havoc, and only Vasilisa can save them.

THE CHARACTERS:
The characters are written really well and each have more to them than you first assume and there is a story behind each of their choices and how they all came to be who the person they are. A villain isn’t just born a villain, they aren’t evil from the moment they were born. There is a reason for their actions, their parents, their upbringing, their personal experiences.They are each distinct and memorable.

THE WRITING:
My favorite part of the book . It was so beautiful and perfect and i just wanted to have this story read to me as while i sat, wrapped in a blanket, in front of the fire, while it snowed outside. It was perfect for this type of story and complemented it perfectly. It was lyrical and it was so…romantic.

OVERALL:
I loved it and thought that it was just perfect. I am definitely going to read the sequel

This book in my opinion is Courtney Summers best book yet. I don’t think any of her other books left me in such a state after the ending as this one did. I honestly have no words to express my emotions. All i want to do is place a cover of protection over all children to save them from the terrible thing that happened to Sadie, her sister and a lot of other little girls who had no way to protect themselves. I also want to kill every person who has ever tried to sexually abuse, assault or rape anyone. I know my religion doesn’t condone violence, but i am just so angry.

The story is about Sadie whose sister has been murdered and her journey to not just gain vengeance for her sister, but for anyone else who has been harmed the same way.

The story alternates between the podcast The Girls which is the journey that is narrated by Wes McCray, who tries to find the truth about what happened to Sadie after getting a call from her grandmother and Sadie’s POV. It gives the reader more information about the people that Sadie left behind and how they dealt with her disappearance and gives more insight into her relationship with her sister, her mother and others

The relationship between Sadie and Mattie ( her sister) broke my heart. As a girl with an older sister, it made me want to pull Sadie close and envelope her in a big hug. Her love for her sister had no limits and it wasn’t always appreciated, but it gave her a purpose and also someone who loved her back, something that her relationship with her mother lacked. In my opinion it was the most important part of the book. I could go on about for pages but I won’t.

The characters were all complex and so… human. That stood out. How aspects of them are so alike to you and I. Even Claire, Sadie’s mother who I disliked at first, I grew more sympathetic towards when i heard her point of view.

The writing was amazing and the idea of including the podcast as well is a great idea. It was engaging and I really cannot think of anyone better than Courtney Summers to write this story.

Please don’t make the mistake of leaving this book on your ever growing pile of tbr books. Pick it up. Read it and try and prevent such things from happening. Especially women, as we are the most likely victims.

“Never show, Never tell.”
Okay, before i start the official review, i wanted to know: didn’t that line remind you of Frozen? Just me? That’s fine.

I have a feeling a lot of you are going to like this book, and that’s good. Personally I am really not sure about my feelings regarding this book. I liked it, but I didn’t love it. I read every page, i wanted to. But I didn’t devour it. There were some things that I didn’t predict, but unfortunately I predicted most of them. Also if you want to know, it isn’t like Frozen.

The story takes place in Chakra which has been conquered by the Aquitans’, and all magic has been banned.

Jetta, is a shadow player, one of the best. She uses her ability of being able to capture dead souls to control her puppets. How? She traps the souls in her puppets and commands them. The problem lies in the fact that the use of , or having such a power could get her killed.
However Jetta has another problem, one that is just inside her: she is mentally ill. The only cure that she knows of is the water of a magical fountain and to get there would mean that she would have to secure a place on the king’s ship that would take her to Aquitan.

However Jetta and her family are soon in danger when she nearly gives them away. With the help of Leo, a gun smuggler for the rebels, she tries to make her way to Aquitan without being found out.

THE CHARACTERS:
Jetta- she is brave and willing to do anything for her family. She is also scared of herself, the power she years and what she really is.

Leo- the owner of La Perl, a bar and a stripper club and also the smuggler for the rebels,though he is not directly in league with them. Even though he was present during most of the book, I would have liked to get to know him better.

Captain Le Garde- the army general and an all round asshole.

I wish we could have had characters such as the Boy King, Theodora and Cheeky’s explored a bit more. They were important but weren’t really given the necessary attention.
The writing was engaging and kept you interested but wasn’t unique. The author uses a few french words in the beginning that may confuse you and like me you may find yourself googling “What is a fantoche?”

Themes such as mental illness, colonialism and feminism explored quite well.

All in all, the book was an engaging read that most readers will enjoy. I definitely will read the sequel.

“Never greet a tiger at midnight,

for they are the manifestations

of your past misdeeds”

All An Ember in the ashes fans, who want to read something similar, this is the book you are looking for.

I was really excited to read this book after reading the blurb. I mean I love books with good politics, romance and mystery… and this book had all of it, but it was it wasn’t enough.

This doesn’t mean that it wasn’t a good book. I did enjoy reading it and was engaged during the story.

So what is it about?

The story takes place in the lands of Jansa and Dharka, two lands bound together by magic that descends from twins Naria and Narian and requires a blood ritual from their bloodline, who are the only ones who have magical powers. Only the females are allowed to rule and it is their blood that is necessary to ensure that the bond isn’t broken.

However, the land in Jansa has been taken over by  a man (typical), known as the Pretender King after a massacre of the rightful royals in Jansa. This results in problems such as droughts and diseases for both lands, and the only thing that can save them is if the blood ritual is performed. The only descendant believed to be alive is Princess Reha, and no one knows where she is.

Kunal and Esha , one a soldier forced into the army as a child by his uncle,  after the death of his parents and the other is the feared Viper, the  legendary assassin, that no one knows the identity of, much less that it is a girl.

Esha is on a mission to kill the general, who happens to be Kunal’s uncle, as a part of the plan to take down the king by the rebel group of Dharka, known as the Crescent Blades. Her path and Kunal’s cross during this, a moment that changes everything.

She finds the general murdered by someone already, who has framed her. Who else knew she was supposed to be here?

Kunal is then sent on a mission to find the Viper which will make him Commander. He puts two and two together, and so begins the cat and mouse game.

The romance in this was kind of insta lovey, but not overwhelming. I love that they wanted each other as they were,accepting everything.

The characters were interesting and Kunal is my favourite. He loves to paint, but has to hide it as he is a soldier. No one is one dimensional and they are quite complex. I didn’t really like Esha that much because i felt that she was similar to a lot of other characters i have read before. She is beautiful and everyone loved her. She was total badass though, so she gets points.

The author’s writing was engaging and the the story flowed quite smoothly. It was able to narrate the story in a way that kept the reader interested. The characters do go through development as the story goes and we learn more about their past and how Kunal regrets all his choices being made for him, whereas Esha  regrets her past actions. They were realistic and i did enjoy reading about them.